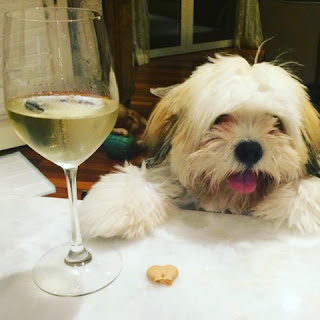 I had a tough day today. Two of my four kids had no school due to a teacher development day so it should have been a simple and straightforward day. But it never turns out that way.

As my 12-year-old went to exit the car, I noticed the shorts she wore were not within dress code. She said she had extra in her locker. My son said, “Wow only two days left until we go to LA to shoot the series.” I'm not sure what we were thinking letting him audition. We live in Honolulu. My stress level went up and my face flushed red. “Have a great day buddy. Love you both lots.” Off they went with their backpacks and water bottles.

I drove to play tennis, my favorite way to relieve stress and I have a boatload of it. I like the people I play with and we play really early so moms can be back on the clock by 9 AM. The pro said, “Don't forget to turn your ringers off. Let's play tennis, not jungle ball.” He's talking to me. If I don't silence my phone, it rings off the hook and I get so distracted wondering if there is an issue, I start to hit impossibly wild shots.

As I exit tennis, I see three missed calls from the school. The nurse tells me via voicemail that my 13 year-old son has been hit in face by a soccer ball and he can't move his neck. I need to bring him to the doctors to get checked out. No choice but to pick him up in tennis clothes after not answering the calls.

I have a call with an independent school so my son can go to school on set while they are shooting the series. I send an email to push it back an hour. I get a voicemail back expressing concern and wondering if I have told the studio my son is injured. Shoot! I'm such a rookie. I call over the radio in my car and explain that everything is okay. His neck isn't fractured; he just has whiplash.

I rush him home and pick up my other son. I have to confirm his parent conference time because I was sure I would remember it and never wrote it down. He is a different learner so I never know how things are going to go. There are no fires to put out! He's proud and I'm proud.

There are two more pick-ups, a friend drop off, a tennis lesson, a basketball game (we volunteered to tape all the games in a moment of weakness), a running session, an alleged swimmer's ear and two tests to prepare for tomorrow.