Is the Truth Overrated? 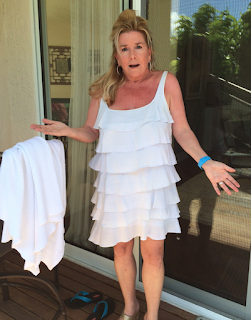 As parents, my husband and I have always insisted that telling the truth is critical. It is one of our most important rules. No lying. Lying is a sure way to get your phone taken away or earn some other dreaded consequence. But now that my four kids are teens and tweens, I want them to stop telling ‘their truths’ sometimes. Keep things in a thought bubble instead.

Last night, we decided to go to a local restaurant for dinner. I quickly changed into a casual sundress. My oldest daughter, Olivia, asked, “Are you going to wear that?” I almost responded, “No, I just put this on for fun. I’m going back into my closet and put on the outfit I’m really going to wear. This is my trial outfit.” This would only earn me a remark like, “Did you really say ‘outfit’? Really Mom? No one says that. Not one person.” Then I would be a dinosaur in a lame dress. She was not neutralized by my silence. She went on. “Ethan, do you see what mom is wearing? She’s wearing the nightgown again.”

In the restaurant, my tween daughter, Natalie grabbed my hand and looked at me earnestly. “Mom, your hair is about eight different colors. You need to fix it.” I took my hand back before she could see my bitten cuticles. I ordered a glass of wine. My teen daughter Olivia said, “You’re going to end up in jail if you drink that and that would be so embarrassing for me. Plus, I need a ride to Jen’s party this weekend.”

Then my teen son Christian said, “No offense but…” I cut off his sentence because I don’t want to hear the rest of it. Inevitably what’s coming next is something negative. He had already said, “I’m just saying…” after making the observation, “That dress makes you look a little big.” I yelled at him for using poor grammar (‘little big’ is not a phrase) and made a mental note to never wear this dress again.

I don’t take it personally. Anyone can be the subject of their ‘observations’. My husband and I went to Napa for our anniversary. My parents came out and stayed with the kids. Everyone allegedly had an amazing time while we were gone.

But last night during the dinner, Natalie said, “To be honest, I think Grampy has to work on a few things.”

Ethan agreed, “Grampy is really fun and we love him but he breaks promises. You need to tell him we can see PG-13 movies. He promised to take us to the movies and then we didn’t go.”

No one is safe from teens’ and tweens’ observations. They had a conversation about two iconic figures. Their opinion was Justin Timberlake is old and they had never heard of Clint Eastwood. The only connection they made is that both have trees as part of their names. And they thought this was hilarious.

Why do they tell the truth about my mommy flaws? They are constantly evasive about their own situations. I asked if anyone was sneaking electronics into his or her bed. I asked my son if he followed up with a teacher over a bad grade to see what can be done. I asked my other son how he ended up at a night beach party. “I don’t know what happened. We just ended up there.” I asked, “So you blinked your eyes and all of a sudden there was sand under your feet.” Blank looks were the response to all my queries. My sweater blanket had become a wet blanket.

Then it dawned on me. They tell the truth about my mommy flaws because they love me. This is their teenage way of teasing me, of trying to be funny. They are including me. I’m in the circle. And we are laughing and hanging out as a family.

Driving home, there was a fight over a song on the radio. I felt like my head might explode. I called Olivia a pill. She countered, “Did you hear what mom said?” Of course everyone heard what I said. We are all sitting together in the car. That’s the set up line. Because the follow up was, “Mom said I‘m acting like a pill! Hah! A pill! As if a pill acts like anything!” Then they all laughed so hard I thought we might drive off the road. I laughed too, treasuring this as a fun and memorable night.