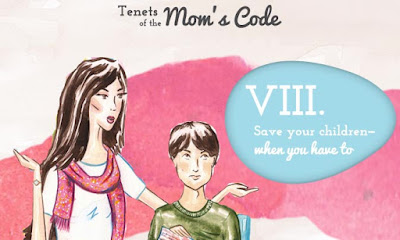 The strangest feeling pushed its way into my soul. That it had to be me at home raising ‘them’, the four ankle biters. That I couldn’t leave this immense responsibility to anyone else - not even our greatest babysitter. Part of me wanted it to be me. I wanted to be thought of as a good mom. I wanted the damn ‘world’s greatest mom’ mug.

My husband often reminded me how lucky I was to stay home, but I was very conflicted. I was down in a playpen arena fighting it out and he was in the luxury box after work, observing everything, ready to comment as the plays unfolded, if he was home, which was not a lot. I also felt the balance of power in our relationship shifting and I didn’t like it. All of a sudden his career took uncontested priority while a Little Tykes shopping cart bulldozed mine. Sometimes after work, he would walk into a kitchen of cheeriness, with a bubbly wife sharing all the news of the day; other times, he would enter a dangerous den with a chardonnay-holding tiger ready to pounce due to all the day’s cumulative injustices. I understood perfectly that play date politics, pick-up line transgressions and volunteer jobs at school turning into power plays, were not life changing issues, but as he learned the hard way, pointing that out over and over was not a good idea, especially if he did it with an eye roll.

I had not made time to meet other moms in our suburban town until school started. Luckily, the kids got into the adorable town nursery school. On the first day of school, I met the nicest group of moms and danced to my car, singing along to Pink, gleeful at having 2 ½ hours relatively free, with only one baby, who I planned to force naps upon so I had at least an hour alone! So, my two biggest kids went to nursery school, I had a baby at home, and was pregnant with the fourth. I enthusiastically planned play dates, put the kids in activities with other kids (whose moms I liked J), and threw kiddie holiday parties.

Becoming part of a mom group was life changing. Moms need other moms. The discussions I hated pre-kids were now very relevant. 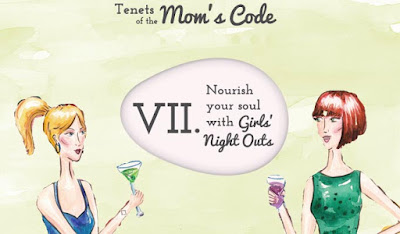 The women quickly became important to me. I trusted them. I was part of something meaningful. There was realness and honesty about something precious to all of us. Raising our beloved ankle biters.

These dinners were different from work dinners as we endlessly discussed our kids. We shared stories of successes and failures, struggles and wins, saving us countless hours on the Internet or in therapy. We aired our secrets and there was very little judgment. One mom confessed that her kids constantly threw gummed up cheerios at her head as she drove! Another said that her child ran and hid every time a play date ended and melted down as they left, causing scene after scene! Another confessed that her preschooler couldn't really read! We all had days filled with tiny people who sapped our energy then demanded we belt out Wheels on the Bus one more time.

We laughed about whether Mother’s Day is a ruse on moms or a real holiday. Bad buffets with grouchy children in dressy clothes, yelling dads and a long wait despite having a reservation were common themes. 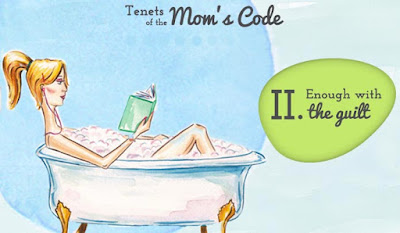 We agreed it would be more relaxing if the husband took the mad children to breakfast and let us sleep in. We would leave instructions to slide the cherished card under the closed bathroom door.

One working mom confessed, “Today Mackenzie was sick— again. I had to cancel my work trip to London and work from home. I sat at the doctors’ office for two hours, surrounded by kids with pink eye, only to hear, she should rest. I feel like someone threw me in a garbage can and rolled me down the road. My roots are showing, my nails are chipped, and Mackenzie cried in the background of an important call, because I bought TruMoo chocolate milk instead of Nesquik. And I’m using the drops because I might have pink eye. That’s why I look like I have a lazy, weepy eye tonight! Future partners can’t have pink eye!”

The weepy eye was like a traffic accident that I couldn’t look away from. We all backed up a bit, dreading getting conjunctivitis. I said,“I don’t know how you balance your big job, commuting to the city, and all Mackenzie’s stuff.”